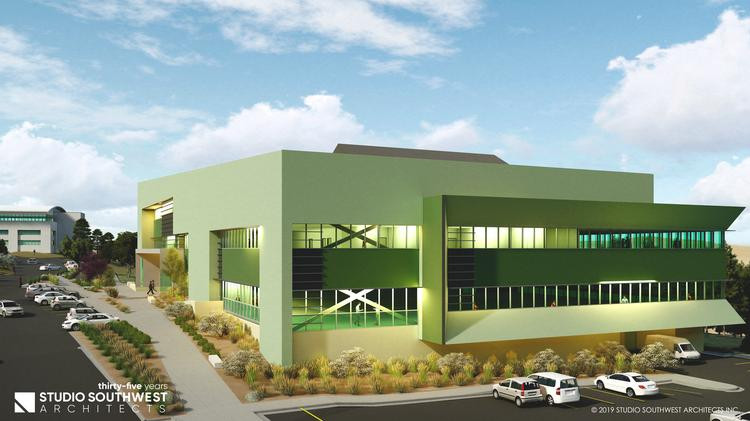 When Los Alamos-based Pebble Labs began outgrowing its incubator space at the New Mexico Consortium Biological Laboratory, those at the Consortium saw a potential problem.

“We didn’t want [Pebble Labs] to leave Los Alamos,” or possibly the state, said Consortium CEO Steven Buelow. “We filled all our space.”

Now, following the closing of an $11.5 million deal to sell its bio lab to Pebble Labs last month, the Consortium is slated for a big move into a planned 86,000-square-foot building at the Los Alamos Research Park, owned by the U.S. Department of Energy and leased to the Los Alamos Commerce and Development Corp. The building will include bioscience-focused lab and office facilities, and the Consortium will work to grow new companies and facilitate research there.

A groundbreaking is planned for April 2020, and LACDC Executive Director Patrick Sullivan said the project will take around 14 months to complete. The site will be near another leased Consortium facility at the same park, Buelow said, and will be the organization’s third in town.

The Consortium plans to lease either most or all of the building, though exact square footage has yet to be determined, according to Buelow. If the organization were to lease the entire space, its bio lab would be over three times the size of its previous one. It works with Los Alamos National Laboratory and state universities to support research programs, scientific outreach, economic development and more.

The total cost of the project is expected to be around $30 million, with about $20 million being invested by the LACDC on the facility’s shell and another $8 million to $10 million to be spent by the Consortium on the buildout, according to Sullivan and Buelow. Albuquerque-based Studio Southwest Architects and Jaynes Corp. will be contracted for the project, they said.

Building a bigger bioscience hub could bring more high-paying job opportunities to Los Alamos and the surrounding area. Pebble Labs, which recently closed a $12.5 million funding haul, is on track to create over 230 jobs with government incentives, and invest at least $60 million over the next decade. Pebble Labs’ full-time employees earn about $130,000 in average salary annually, according to a state news release earlier this year.